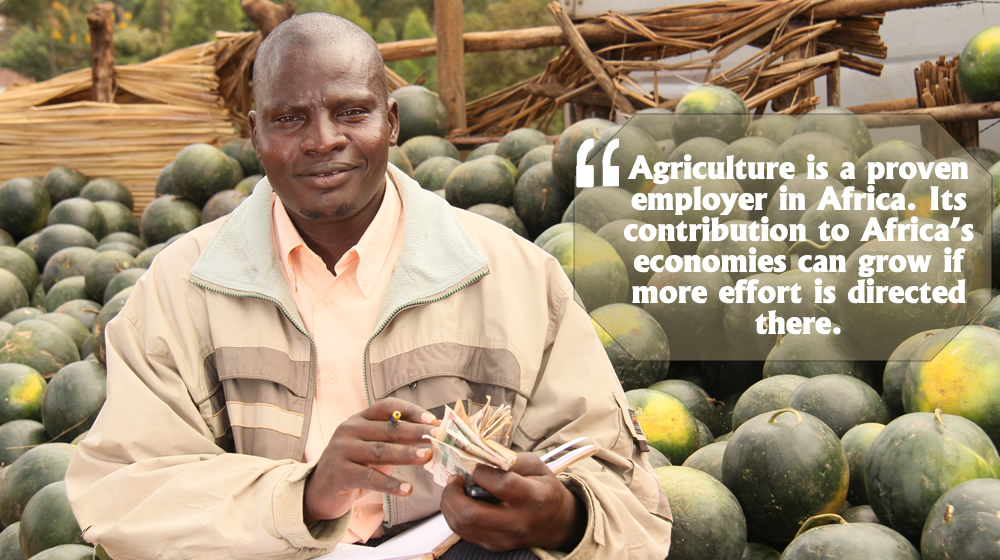 Looking for a Job? Try Agriculture!

One of the biggest headaches for any new graduate in Kenya today is where to find a job. Increasingly, the country seems to be producing more graduates that the existing job opportunities. Kenyan universities graduate an estimated 100,000 new university graduates each year and according to a recent World Bank report there are 800,000 job seekers in the country against an estimated 50,000 available advertised jobs each year (Mail & Guardian Africa, 2015).

Indeed, according to the World Bank, the youth unemployment rate (youth unemployment refers to the share of the labor force ages 15-24 without work but available for and seeking employment) in the East African country seems to be on an upward trajectory since 2010 and now stands at 17.1%. Even though Kenya’s economy seems to be gradually growing with an expected growth of 5.7% in 2015, young people are still majorly unemployed.

The International Labour Organization (ILO) estimates that up to two-thirds of the young population is underutilized in developing economies - either unemployed or with irregular employment. Global youth unemployment is at crisis levels, with 12.6% of young people currently unemployed about 73 million youth.
But even with this unprecedented hike in youth unemployment numbers, some quarters and policy shapers believe that the answer to this dilemma lies within the Agricultural sector. How so? Statistics indicate that over 60 per cent of Africa’s economically active population works in and lives from agriculture; over one third of total value-added products come from agriculture; and, surprisingly, Africa imports close to US$50 billion worth of food every year, mostly to feed its rapidly expanding urban population. The ILO believes that this is equivalent to what Africa receives in official development aid, and over five times more than the amount invested in future economic growth by the African Development Bank.

In Kenya, the sector contributes 51% of the Gross Domestic Product (GDP); 24% directly and 27% indirectly through linkages with manufacturing, distribution and other service related sectors. Approximately 45% of Government revenue is derived from agriculture and the sector contributes over 75% of industrial raw materials and more than 50% of the export earnings (IFPRI, 2012).

What do these numbers tell you? Agriculture is a proven employer in Africa! Its contribution to Africa’s economies can grow if much more effort is directed there. The ILO (2013) has stated that Africa needs to focus on raising food output per unit of land among the large majority of small-holders. 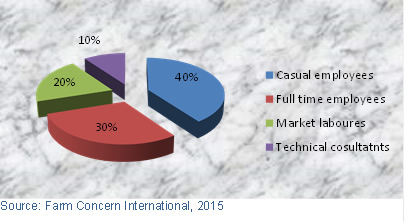 An “agriculture first” strategy - widely discussed in the 1970s - would raise much needed foreign exchange currently used to import food that should be grown in Africa; it would protect the continent from the vagaries of volatile food prices and would raise incomes in rural areas, reducing poverty and raising demand to boost growth. This would provide more productive jobs for a significant share of Africa’s youth.

Can the agricultural sector be the answer to youth unemployment in Kenya? Well, I guess you have the answer! Farm Concern International (FCI), a market-wide development agency in Sub Saharan Africa, is already working on this. In one of its programmes, the Domestic Horticultural Markets. (DoHoMa), funded by the Bill and Melinda Gates Foundation, there is a recorded increase in the number of people employed by smallholder farmers.

The report shows that in the year 2014-2015, a total of 1,300, 288 casual and 1,031,314 full time employees are engaged in the various farm activities such as land preparation, planting, weeding, harvesting and commodity value addition. With regard to trade and the markets, thousands of others are engaged in offering loading, offloading, cleaning and security services. The job opportunities created are mostly taken up by young people who could have otherwise been idle and unproductive. In addition, more young people are seen to be taking up agriculture as an enterprise instead of waiting for more formal employment.