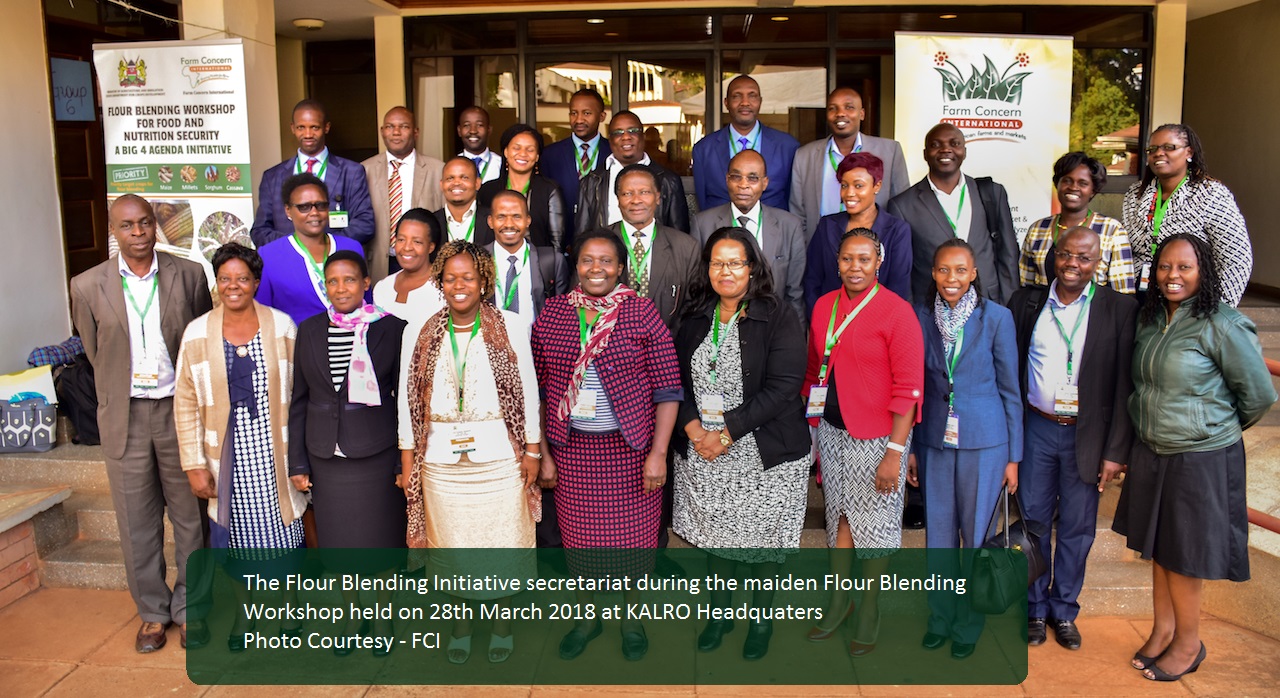 The Flour Blending Initiative is an outcome of a series of intensive stakeholder consultative process of experts drawn from Government agencies, research & development partners, academia and private sector players funded by The Ministry of Agriculture, Livestock & Irrigation and Farm Concern International, FCI. The stakeholders have developed a 5-year implementation framework targeting an annual production of 14.8 Million bags of assorted underutilized crops for a 30% maize flour blending that focuses on increased access to micro nutrients through a food based solution and enhanced food security. The target crops for maize and wheat blending include millets, cassava, sorghum & amaranth grain.

The initiative is part of the “Big 4” Plan; Agenda 2, aimed at contributing towards the 100% Food and Nutrition Security by 2022. This multi-sectoral approach has been carefully designed through a consultative process that targets a high-impact approach aimed at integrating ASALs as food & nutrition secure regions that competitively contribute to the national food basket. The overall objective of the Flour Blending Initiative is; to contribute towards food security, improve nutrition and increase employment opportunities in Kenya through flour blending based on under-utilized high value foods.

The Flour Blending Initiative is informed by Kenya's growing concern of the predominantly consumed high energy-based diets that commonly lead to "Hidden Hunger". The recommended daily intake for micronutrients is in small amounts but their deficiency often referred to as 'Hidden Hunger' is catastrophic in relation to impact on health that can be devastating and capable of causing irreversible lifetime damage that transcends generations. Studies have shown that a significant proportion of the population are not meeting meet their daily food requirements. The Kenya Demographic and Health Survey (KDHS, 2014) report indicates that, nationally, 26% of children under five years are stunted.

Consequences of malnutrition in Kenya include Non Communicable Diseases (NCDs) which account for 50% of hospital admissions, low life expectancy: 61.5 years, increased health care costs and heavy disease burden. The four main NCDs accounting for highest number of deaths are largely triggered by micronutrients deficiency and include cardiovascular diseases, cancer, respiratory diseases and diabetes. Good nutrition balance through dietary diversification is key to achieving our human development goals. It is important to ensure availability of diverse, wholesome and nutritious foods, not just for survival, but for people to thrive and grow to their full potential for meaningful contribution to the socio-economic development of our country.

Maize, both in terms of subsistence and market-purchased crops, is the most important staple food-crop relied upon by about 96% of Kenyans and contributes significantly to food security and income in the Country. Maize dominates food consumption, accounting for 9-18% of total household expenditures across the country. This has increased the demand for maize despite the downward spiral in its production. According to Economic Survey 2017, maize production declined from 42.5 million bags in 2015 to 37.1 million bags in 2016 reflecting a 13 percent drop. This has pushed Kenya to rely on imports under the subsidized imports programme to meet its annual maize requirements of nearly 62 million bags. Maize is deficient in some essential micro-nutrients that are required for proper growth and development. It is a high energy and low nutrient meal hence continued consumption of maize meals alone lead to micronutrient deficiency.

This initiative has further been presented to the Parliamentary committee for Agriculture and the Council of Governors and currently at the regulations development stage. The team developed a zero draft of the regulations anchored on the Crops Act, 2013. Kenya Bureau of Standards organized a National Agreement Workshop during which the draft blended flours standards were reviewed and adopted.

The Maize Flour Blending Secretariat in consultation with legal and technical experts has developed blended flours regulations and standards to guide & govern implementation of the initiative. The regulations and standards will be subjected to public participation for feedback, review and validation before gazettement. An implementation strategy has also been developed based on six key focus areas: Production Systems & Commercialization; Agri-Nutrition, Health and Consumer behavioral change; Private Sector Engagement, SMEs and Investment; Standards, Food Safety, Policy and Regulations; National Government, Counties and Partners Implementation Partnerships; and Resource Mobilization, Funding & Strategic Partnerships. The strategy highlights an elaborate plan for public awareness and image building education on the target value chains for increased consumption of blended flours by Kenyans. Commercialization campaigns and capacity building will also be conducted for the targeted 4,003,560 smallholder farmers to produce under-utilized crops for flour blending. Moreover, the Flour Blending Initiative will create employment for 3,820,704 Kenyans through Small and Medium Enterprises engaged in flour blending and farm level employment by year 5.