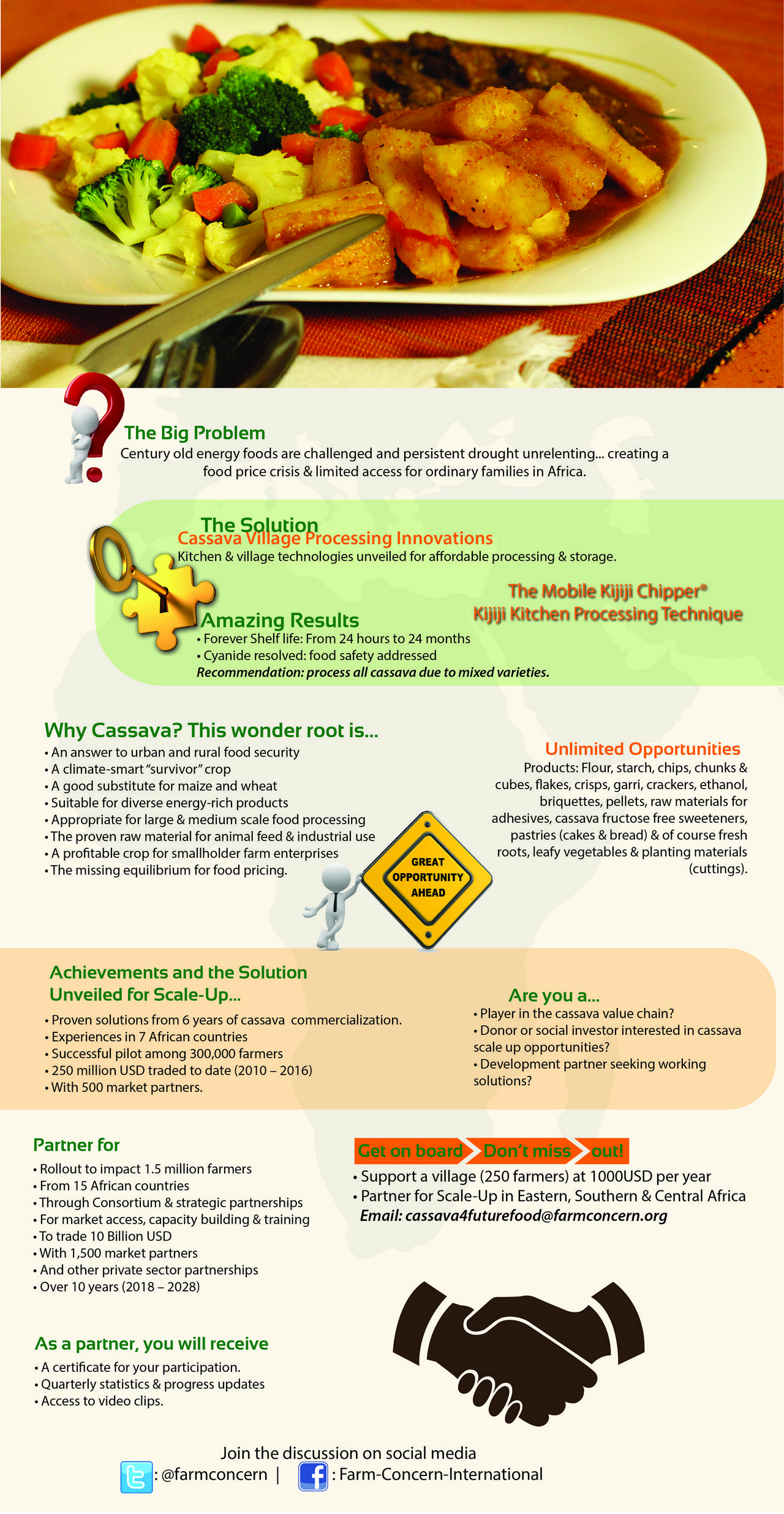 Farm Concern International, FCI with multi-donor support and in partnership with Government Agencies, Research Organizations and Development partners has been implementing an East African Cassava Village Processing Initiative that is increasingly taking a lead in turning around the commercialization of cassava as a viable profitable crop. The initiative comprises of several partnership-based programmes at country and regional level in Tanzania & Zanzibar, Kenya, Uganda, Rwanda and Burundi.

The success stories below are the evidence of FCI interventions in cassava commercialization:

Commercialization of Cassava has opened an additional financial window to farmers from Tangakona Commercial Village (CV) in Western Kenya. Farmers have taken advantage of market demand to supply the much needed cassava and sweet potatoes planting materials in Busia and beyond. This is as a result of commercialization campaigns and market linkages by Farm Concern International under the Cassava Commercialization and Processing Programme supported by Alliance for a Green Revolution in Africa (AGRA) and implemented by FCI...Read More

Residents of Mbuvo Commercial Village in Eastern Kenya have improved food security and increased income under the Kenya Cassava Commercialization and Processing Programme supported by Alliance for a Green Revolution in Africa and implemented by Farm Concern International. “We harvested a total of 16,016 metric tons which was consumed domestically while the excess was chipped and dried for storing,” remarked Mr. Masyuki- the Commercial Village chairman...Read More

The Tanga Kona Commercial Village is one of the organized CVs that form trading blocs for agricultural commodities. In doing this, the communities’ capacity to utilize available resources for commercial gains and to engage themselves in market-led production or processing activities has been enhanced as the Commercial Villages are strategically linked to buyers. This transforms the villages to commercialized entities that operate as business units – turning villagers and neighbours into organized business partners...Read More

Bubwini Commercial village in North B district was formed in 2015 as a result of commercialization campaigns conducted by Farm Concern International (FCI) under the Cassava Village Processing Programme funded by USAID through Alliance for a Green Revolution in Africa. It has 4 Commercial Producer Groups (CPGs); Saa Njema, Tamaa Ipo, Masikini ndio mwenyewe kazi and Tumwambie nini with 100 members. It is led by a Commercial Village Trade Facilitator (CVTF); Maulid Othman famously known as Jesh (Army)...Read More

Mr. Marando Charles who is aged 50 and married with four children is a prominent cassava farmer from Kizimbani village which is also a home for the common Kizimbani Research station situated about 17 KMs off the Western part of Zanzibar town (The stone town). It is within the West A district of Unguja Island. Mr. Marando took advantage of his village playing host to Kizimbani Research Institute to acquire cassava planting materials produced by the institute with the support from CVPP project to start a business of producing and selling of improved cassava planting materials...Read More

Foum Makame, a married father of six children, is a farmer from Kazole village in North ‘B’ district who grows cassava as a cash crop. His other crops grown in his land include banana, rice and sweet potato. Mr. Foum has about 3 acres under cassava where he uses family labor for the rest of the field operations except for bush clearing and ridge making where he uses hired labor. Mr. Foum used to grow cassava in the past but he was disappointed with the performance of local varieties of cassava which were susceptible to diseases and pests, and decided to turn into other crops...Read More

Mr. Kombo Khamis is a farmer living in Bumbwini village, which is located in North B district. Mr. Khamis grows many crops, but her major ones are cassava, sweet potato and rice. He performs his farming activities with the help his wife, but he is the one who bears the overall responsibility in managing the farm. Cassava being his major food crop as well as cash crop, it is planted mainly during Vuli season (September-November) and Masika season (March-May)...Read More

Cassava farming improves the living standards of farmers in Zanzibar

Bi Kazija Hamis, a 41 year old single mother of 4, lives in Kiombamvua District in Unguja and is a member of Kiombamvua Commercial Village (CV) in Zanzibar. “Before the introduction of the cassava project by Farm Concern International, I used to grow cassava on a small plot of half an acre mainly as food crop and not commercially. I would harvest 7-10 bags of fresh cassava from the 0.5 acre farm and sell at TSH 12,000 (USD 6) per 25kg,” said Bi Kazija...Read More

Four years ago, Bernard Ndawa member of Mbuvo commercial village (CV) was purely a subsistence farmer who was food insecure; he was always in the list of priority farmers when food aid was distributed in the area. Life has since changed after his involvement in the Extended Cassava Village Processing Programme (ECVPP) a project supported by AGRA and implemented by Farm Concern International (FCI). He he was able to pay his last born daughter’s university fees...Read More

Elina Sultan is a farmer and a village frontline worker from Nyongoro Village in Kilifi who has been in the fore front campaigning on cassava commercialization under the Kenya Cassava Village Processing Initiative supported by Alliance for a Green Revolution in Africa (AGRA) and implemented by Farm Concern International (FCI). Initially, Elina used to be a peasant maize farmer also growing a few cassava stands for subsistence purpose... Read More