Retailers are the biggest gainers in the maize supply chain

Maize is the single most important crop in Kenya, as even the communities that had traditional staple foods previously continually adopt it as the staple food. Needless to say, there is expanding demand for maize amidst shrinking arable land due to fragmentation and construction of other infrastructure leading to scarcity. However, this situation has not translated to increased income for farmers who labour to meet the high market demand in Kenya.

USAID- Kenya Agricultural Value Chain Enterprises Project,Â the retail margin was found to be relatively high at about Kshs 1,170 followed by farmer margin of Kshs 856.60. Wholesale trader margin is relatively lower than that of farmers and retailers in terms of unit value attributable to the fact that the wholesaler deals in bulk while the retail is per unit in kilograms over a relatively longer period of time. It was also noted that brokers collect maize from the farmers on behalf of wholesalers at a fee of Kshs 355 per bag.

There was also a notable variance between the farm-gate price and wholesale trader buying price per bag of maize of about Kshs.355 on average across the sampled counties and markets. This scenario is mainly attributable to sourcing fees paid to local brokers who source the commodity on behalf of the wholesale traders. Â 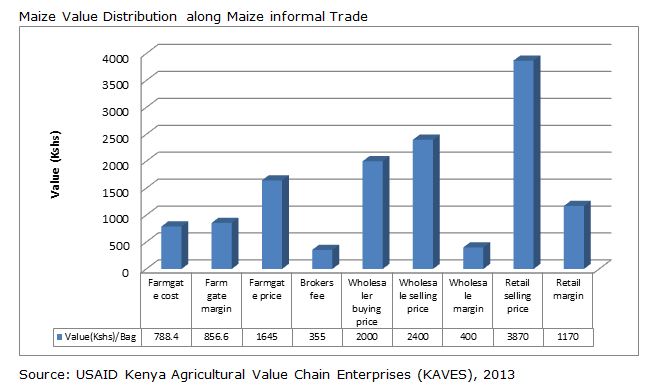