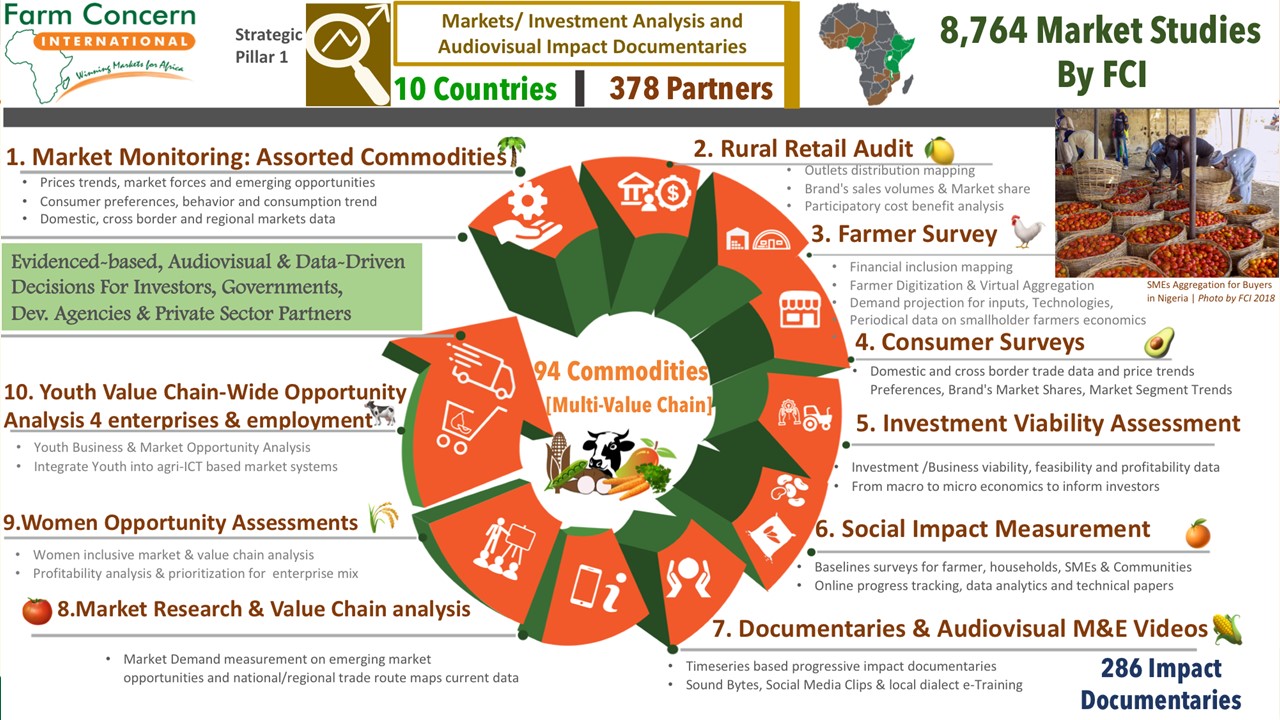 Research is one of the key Strategic Pillars of Farm Concern International and forms a basis for designing and implementing innovative commercialization programmes.
Through this pillar FCI has undertaken various Baseline Surveys, Monitoring and Evaluations, Market Assessments, Consumer Surveys and Value Chain Analysis across various regions and countries in Africa either as a precursor to its development programmes or contracted to undertake research on behalf of other development agencies and other clients.

Through continuous Market Research and Opportunity Analysis in the agricultural sector, FCI has earmarked opportunities that seek to integrate communities in order to enhance their retained access and control of incomes realized, expand their productive assets / resources and enhance their participation along mainstream value chains.

The key objectives of research is to provide the institution or client with information that enables them to make informed decision on the various intervention that are to be implemented in the various programmes especially on specific issues of the target value chains.
FCI has a vast experience in conducting various researches and has been implementing pro-poor business models that increase market participation of smallholder farmers and communities including the participation of youth in agricultural trade thus enhancing sustainability and profitability of smallholder agro-enterprises. FCIâ€™s research department has conducted over 70 research studies internally or as consultancy for various clients across the world.

FCI undertakes research based on the Value Networks Research Tool (VNRT); a tool developed and applied by FCI. VNRT is a hybrid research tool of private sector and development market research tools, based on various parameters, designed in response to shifting gears from a conventional chain analysis or market research to a multi-portfolio analysis of a dynamic economy leading to identification of key market hubs in an economy and a comprehensive analysis of opportunities and threats.

2. Monitoring and Evaluation of various programmes

According to a study conducted by Farm Concern International to assess the postharvest handling practices of small scale farmers in Siha, Hai, Arusha and Meru districts, there were poor postharvest techniques that were observed in Hai and Siha Districts. Curing of onions in Kawaya village and potatoes in Ngarenairobi was not done as is required for the two crops. Carrots and tomatoes on the other hand were packed with dirt. Onions were observed to have thick necks which were as a result of the pre harvest conditions while potatoes were not cured. It was also reported during Focus Group Discussions (FGD) that crates of tomatoes were heaped one on top of the other, causing mechanical injury on the tomatoes at the bottom of the pile. These are issues which require to be addressed through capacity building of farmers and traders...Read More

A value chain Analysis conducted by Farm Concern International, FCI in Malawi revealed that the total annual market size for the target commodities across the sampled markets is estimated at USD 5,214,234 which is only 38% of the total market capacity. This means that there exists an unmet demand for the target commodities in the sampled markets valued at USD 8,488,753 annually. Fruits and vegetables worth USD 1,404,187 are annually traded across the sampled informal wholesale markets which is only 16% of the market capacity. Fish worth USD 2,029,368 and roots and tubers worth USD 393,608 are traded annually accounting for only 51% and 34% of the market capacity. However, the market findings indicated that informal markets are usually oversupplied with grains and legumes where 3,419MT of legumes and grains are supplied in the informal markets against the market capacity of 2,174MT which is 157% of what is demanded by the market...Read More

According to a Value Chain Analysis (VCA) study undertaken by Farm Concern International on behalf of FAO Somalia, the major challenges that farmers in Somaliland encounter in agricultural production and marketing were indicated as lack of transport and high cost of transport indicated by over 90% of the farmers, lack of market information (85.8%), poor infrastructure including lack of proper storage facilities (81.1%) and low pricing 61.3%. All these factors point out to two main issues; the long distance to the markets makes farmers transport commodities for long distances and poor infrastructure making the cost of transport high. Flow of market information is also inadequate and ultimately market access is limited for farmers while low pricing further inhibits farmers from investing in agricultural enterprises since profitability is suppressed...Read More