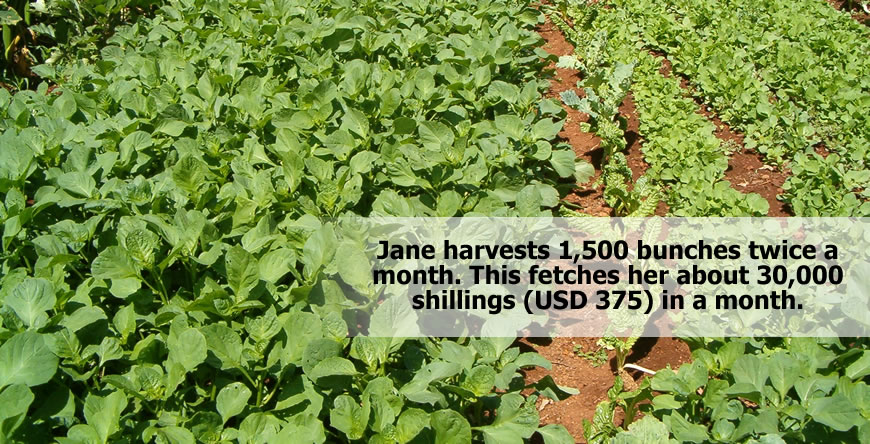 What would make a secretary leave her office environment, and exchange her desk and computer for the outdoors and farm tools? Greener opportunities in Traditional African Vegetables farming.Â Farm Concern International has over time increased the value of Traditional African Vegetables (TAVs) by opening up diverse market opportunities. This has been realized through the rampant nutritional campaigns in both the rural and urban set ups. Reports from various outlets such as Uchumi supermarket, Wangige, Limuru, Gikomba, Kawangware and Korogocho markets indicate that TAVsâ€™ consumption rates have increased by over 200 percent. 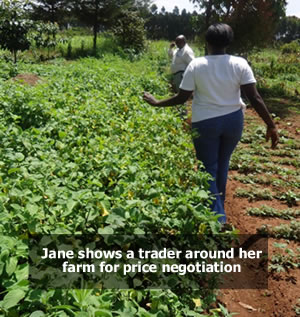 Behind this drastic market open-up are smiling farmers such as Jane Wairimu who are now producing TAVS and reaping the fruit of their labor.Â Thirty-five year old Jane is a former secretary who used to work for a private firm in Limuru town, Kiambu County. She is married to one Pastor Muia of Bethel church in Kabuku village, Kiambu County. The couple is blessed with two children.

Jane worked as a secretary for one year but was not content with the income. She also desired more time to tend to her family. However, at the time, resigning was not an option unless she was sure of a sustainable business venture which could earn her decent income.

She caught wind of the FCI TAVâ€™s campaigns and took a keen interest. She registered in Kabuku Commercial Village and began attending meetings and receiving the technical know-how facilitated by FCI .Testimonials from the practicing farmers who were already making profit from the sale of TAVs assured her of the returns.

Jane resigned her job and set out on TAV commercial production in May 2011. She planted managu, terere, and sageti on her quarter acre piece of land. She harvests 1,500 bunches twice in a month. This fetches her about 30,000 shillings (USD 375) in a month.

Jane is not concerned about lacking markets to sell her produce since she is spoilt for choice. She constantly gets orders and supplies to Uchumi, Gikomba, Wangige and Kawangware markets. However, she knows that quality production is key in ensuring market consistency and therefore goes an extra mile in ensuring that her produce is above the expected standards. This enthusiasm has seen her smiling all the way to the bank!

With money earned from TAVS, she has been able to support her husband in educating their children, buying furniture, buying a cow, expanding production and most importantly opened a bank account with Equity bank where she saves about 5,000 shillings (USD 54.73) per month. Challenges are inevitably part of her experience. They include pests such as spider mites, blight and high cost of some inputs. She has managed to mitigate these challenges with the help of some FCI partners such as Bayer chemicals and Osho chemicals.

Jane has found both the income and flexibility in hours she did not have in her job as a secretary. She has been training other farmers on growing TAVs.Â With her savings, she intends to open a cosmeticsâ€™ shop and increase the land under production.