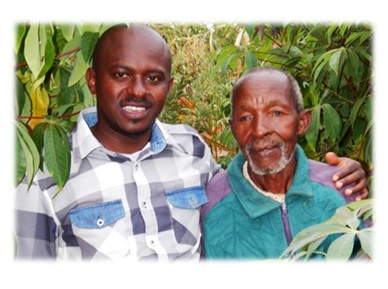 Four years ago, Bernard Ndawa member of Mbuvo commercial village (CV) was purely a subsistence farmer who was food insecure; he was always in the list of priority farmers when food aid was distributed in the area. Life has since changed after his involvement in the Extended Cassava Village Processing Programme (ECVPP) a project supported by AGRA and implemented by Farm Concern International (FCI). He he was able to pay his last born daughterâ€™s university fees. Â Since the onset of this project, the emphasis of farming as an enterprise has dominated the interactions resulting in change of perception from farming as a way of life to farming for business. Mbuvo commercial village has made strides in farming with a focus on producing and selling cassava, green gram and cowpeas.

Mbuvo CV is a growing trading bloc that trades with both the formal and informal sectors. Â In addition, the KARI Katumani seed unit has contracted farmers in this village to produce green grams and cow peas seeds at a price of Ksh 90 (USD 1) and Ksh 70 (USD .82) respectively.

Mr. Ndawa has not been left out. For the past four seasons, he sold green grams and cow peas to KARI and other informal traders worth Ksh 150, 000 (USD 1,765). From the income earned from these sales, Mr. Bernard Ndawa has managed to pay university fees for his last born daughter at the University of Nairobi and also managed to buy a bull that he intends fatten and sell for higher price, a business he intends on growing. Mr. Ndawa is now foods secure and has been able to improve his livelihood by embracing agriculture as an enterprise.