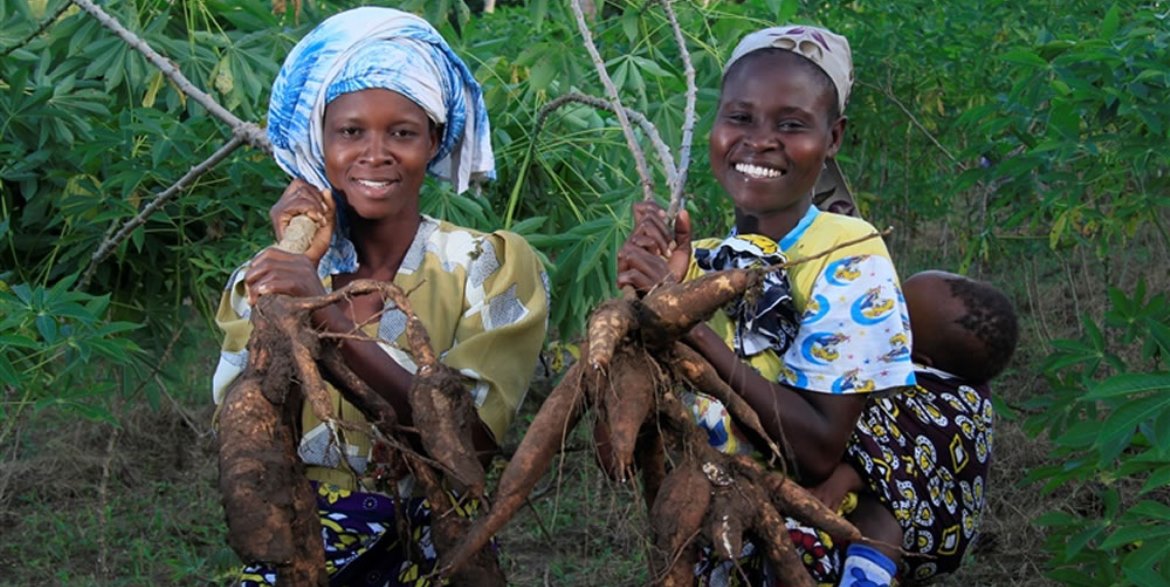 Residents of Mbuvo Commercial Village in Eastern Kenya have improved food security and increased income under the Kenya Cassava Commercialization and Processing Programme supported by Alliance for a Green Revolution in Africa and implemented by Farm Concern International. “We harvested a total of 16,016 metric tons which was consumed domestically while the excess was chipped and dried for storing,” remarked Mr. Masyuki- the Commercial Village chairman.

Eight months after Farm Concern International initiated the programme, cassava farming has fostered the local economy, reduced poverty and hunger among the residents.

Mr. Joseph Mutuku Masyuki, the chair of the 460-strong Mbuvo Commercial Village (CV) together with the rest of its members in the County are an example of the economic and nutritional value of cassava value chain.

FCI made a presentation at a public baraza on the economic potential of cassava and the benefits of collective action among the smallholder farmers in June 2010.  After the presentation, the village members organized themselves into eight Commercial Producer Groups (CPGs); the groups were linked with other interested stakeholders and buyers who created a huge demand for cassava cuttings and tubers.

“The demand for the new variety cuttings was quite high and the Commercial Village was unable to satisfy the farmers,” said Masyuki. Farm Concern International linked the Commercial Village to Kenya Agricultural and Livestock Research Organization (KALRO) which trained them on modern farming activities and introduced them to new improved varieties of cassava cuttings.

As a result of the commercialization campaigns and linkage to KALRO, 32,315 cassava cuttings were bought from KALRO in Katumani at a cost of USD 697.95 and planted on 15 acres of land. Although the rains failed them at the end of 2010, the CV mobilized its members to plant again in March 2011 in the 600 acres bought by the 300 members.

“We harvested a total of 16,016 metric tons which was consumed domestically while the excess was chipped and dried for storing,” Masyuki says. Drying cassava enabled members to store them for nine months as opposed to 48 hours.

Mbuvo CV also benefitted from two chippers donated by FCI. The chippers have enabled them chip and mill cassava into nutritious flour for porridge and ugali. They also sell the chips to animal feed companies as substitute for maize grains resulting to huge incomes.