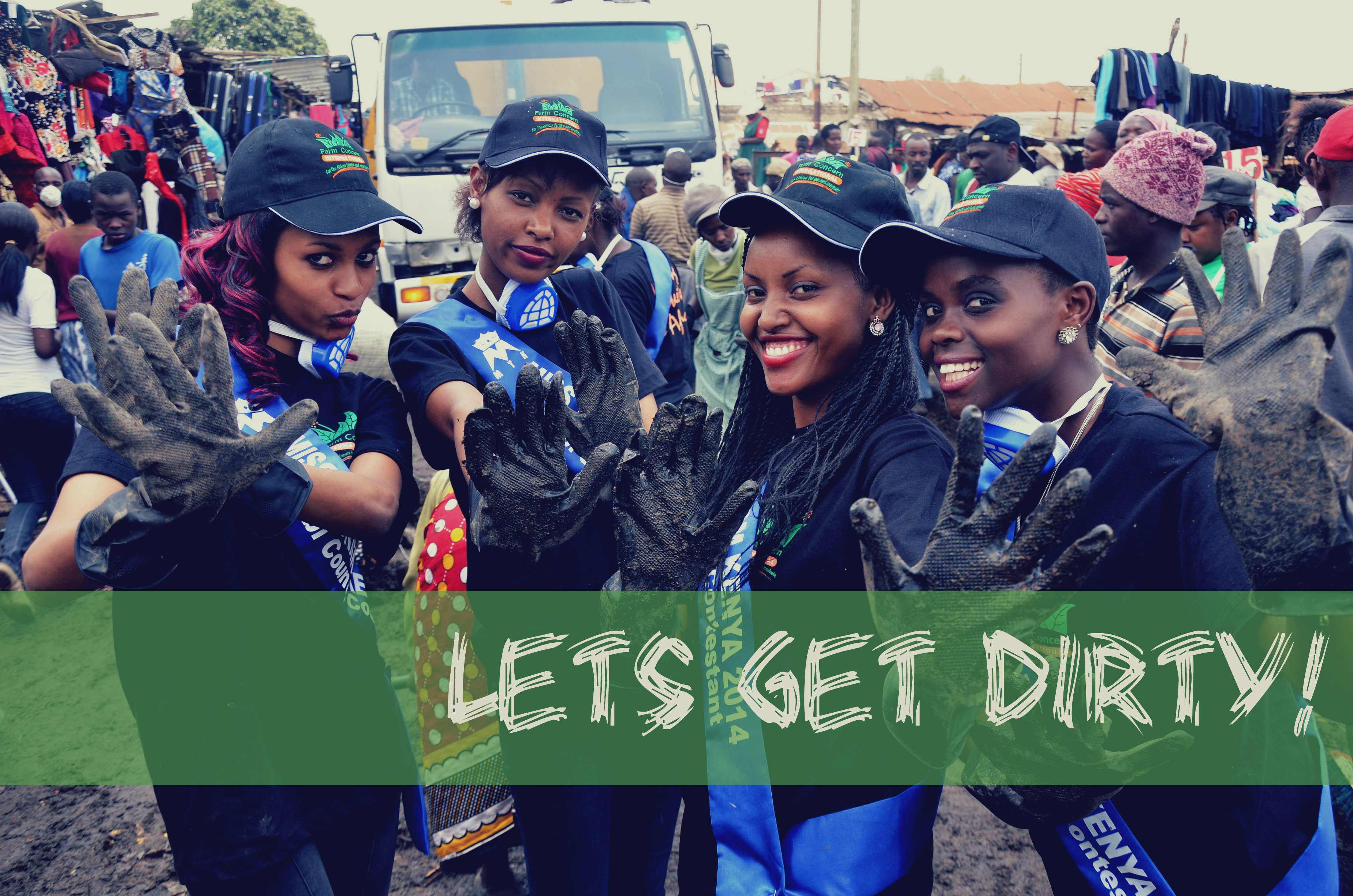 After our models had interacted with FCI staff and eaten a hearty breakfast, it was time to set off to Korogocho market. Accompanying the girls was a team of FCI staff comprised of the Communications crew. We drove off to the market via Thika Superhighway and within a short time, we were there. Like I previously mentioned, it was my first time at Korogocho (popularly known as Koch by the locals). On this day, Koch was busy as usual. The market was abuzz with activity â€“ men and women laden with huge sacks on their backs, women braiding hair and wholesale traders of various food commodities carrying produce for sale. Some occasionally stopped to have a rest as they wiped off their sweaty brows.

Boda bodas also cruised to and fro, doing their part in ferrying goods as well as people. There were canters parked at convenient places offloading fresh farm produce. The contestants who initially looked like they had strutted off a magazine cover, were now clad in work gear. The clean up activity ahead was a joint initiative by Farm Concern International, African Urban Entertainment, Nairobi City County (NCC) and the Korogocho market authorities. Before the work began, the market authorities gave a quick brief of the dayâ€™s programme to the crowd that had gathered. A quick mention was also given to the models and their participation in the clean up initiative. As soon as this was done, it was time to get right down dirty!

The cleanup work started off on high a high note with momentum building up quickly. The sweeping, gathering and shovelling of garbage into the NCC pickup truck picked up steadily without slowing down any bit. I consider myself lucky because I never came hands on with the dirt. I was a spectator the entire time. But the contestants were not spared. Their work on this day was to be duly assessed and would greatly contribute to their overall score. But I could tell they werenâ€™t just doing it for the points on the score card. They were actually having fun as they stuck their gloved hands in muck, simply doing their part in making the place look clean. The fact that it had rained heavily the previous day made the work even more arduous. A section of the market was a combination of mud and garbage. Yes, those gumboots came in handy! But considering the clean up activity was a collaborative effort which also included FCI staff, work was made easy. There were moments when some rest was needed. And the girls used those opportunities either to drink some water or pose for the camera. The photographer had his own glorious moments of skirting around the cleanup crew and trying to capture the best angles of this glorious day. And if the photos are anything to go by, then he did a pretty neat job! Hours later the clean up was coming to a close. I could almost feel the collective sigh of relief from the cleanup crew that the long and tedious collecting and shoving of garbage was coming to an end. But what was to follow next after the conclusion of the massive cleanup activity made this day even grander! I choose to consider it as the icing on the cake. Ladies and gents, I present to you: The Market catwalk-Korogocho edition!

Often times, catwalk events are characterized with glitz and glam. The runaways are usually adorned with colored lights and funky music playing in the background. Invited guests often times sit on both sides of the runaway, appropriately dressed up, smelling like roses and sipping some cocktails in the comfort of a relaxing ambiance. But this edition of model catwalk had none of that whatsoever! It was out in the open market space. The only fancy lighting in place was Godâ€™s sun. Our audience was a perfect mix of Koch traders and curious passersby. How could we have wrapped up this fruitful day without our models showing off their prowess in cat walking? And so the show began. One by one they sauntered down the market street turned runaway, much to the amusement of the hyped up crowd. Then things took an interesting turn when non-models began walking down the runaway as well. Never mind if some of them lacked some sort of rhythm and style in their walk, they did it anyway. A super fun day it was!

Even though everyone wanted the free catwalk show to go on forever, it had to come to a close. The crowd began dispersing as each person returned to what had brought them to the market in the first place. The goal and mission of this clean up day was achievedâ€¦and it ended on a jovial note as well. It was refreshing to see how so much can be achieved when people unite together for a common cause. With such an intense clean up, it goes without saying that our models were a little hungry. And it was time to replenish lost energy! So we drove off to our designated restaurant and were fed to a delightful meal of ugali and fish. Again, the girls unashamedly terrorized the poor cooked fish with so much enthusiasm. This time I donâ€™t have photographic evidence of this part of the day because the photographer himself put his camera aside and was equally engaged in his own moments of ugali time. (It would be considered a grave sin to interrupt a man who is having bonding time with his food) So what more can I say other than I was privileged to be part of the one day internship that left me challenged in one great way. What am I doing at the individual level to make this world a better place? This is a common question we have asked ourselves but for some reason the events of this day brought it home. When we take an objective look at our African continent, we can see that we have our own â€˜garbageâ€™ lying around. The clean up initiative at Korogocho was, in retrospect, metaphoric. It tells us that that our continent has major garbage lying around and its time we seriously thought of initiating a cleanup. We have the garbage of civil wars, unemployment, food insecurity, just to name a few, staring at us in the face. And while I do appreciate external efforts from the West in helping us sort our problems out, this garbage is largely our responsibility. And just the same way it took collaborative effort to clean up Korogocho, it will equally take massive strategic partnership with each other to deal with Africaâ€™s great challenges. These challenges may look or appear insurmountable, but if we joined hands, we will most definitely set ourselves on a pathway that will lead to a future of great wealth and boundless prosperity. And after all the work is done, we shall be eager to catwalk before the rest of the world and show off our full potential.

May God bless Africa. May He bless us all. My work here is done.