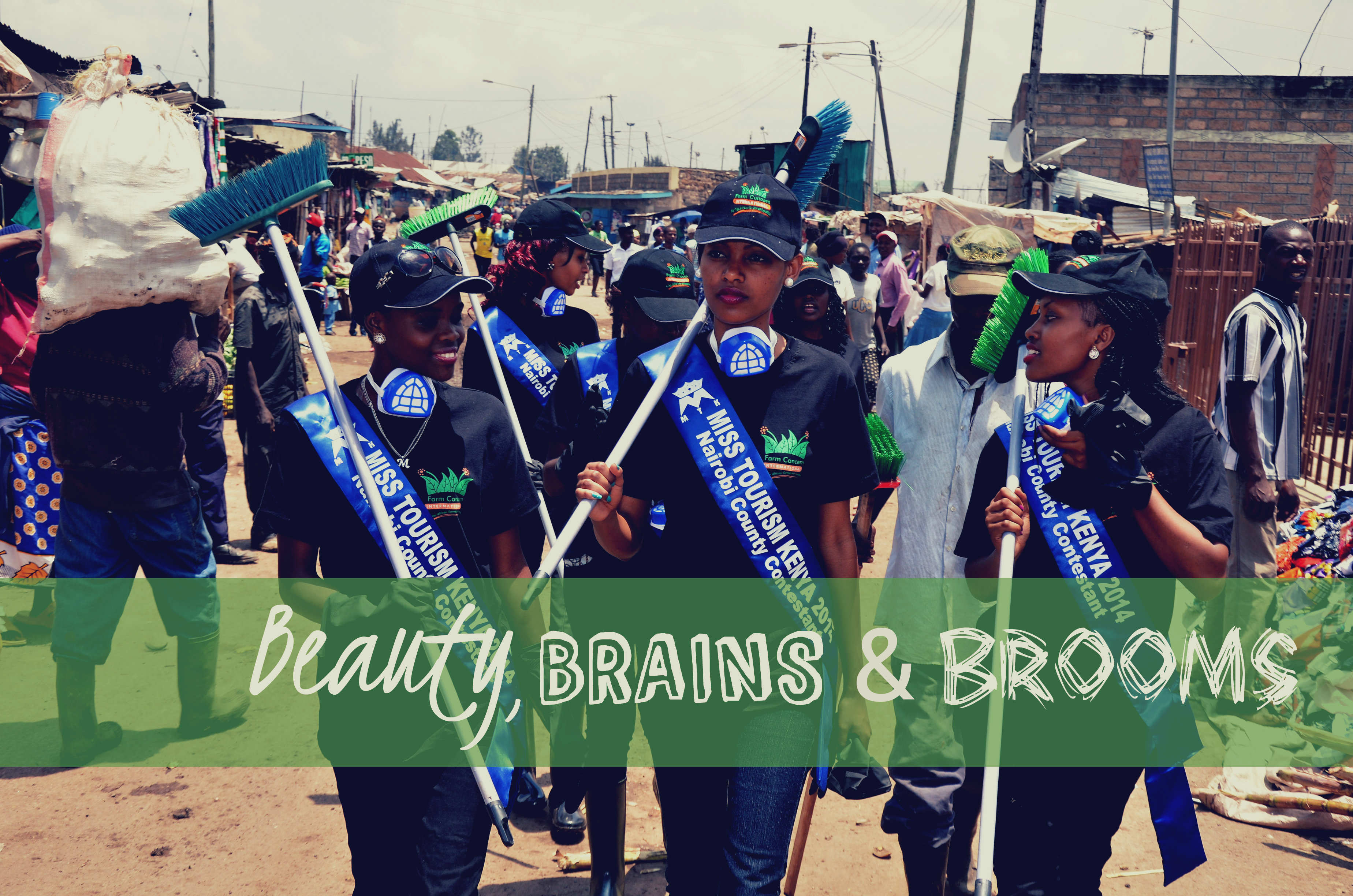 A week ago today I was invited to witness first hand a major market clean up activity at the Korogocho market. What made this event unique was that part of the labor force doing the clean up work consisted of five beautiful lasses who are competing for the Miss Tourism Nairobi title. Now, every time you hear of beauty pageants, what comes into mind?Â A set of girls dolled up with tons of makeup and flashy outfits walking down a runway, right? Or better still I know you are conjuring images of young girls sitting gracefully in a make up parlor having pedicures while someone else fusses with their hair. Hey, whatever girly thing beauty pageants doâ€¦what I witnessed this past Friday was a sharp contrast to my vivid and heavenly imagination of the ideal surrounding of beauty queens. If you have been to Korogocho Market (it was my first time being there), you know how it looks.

Itâ€™s crowded with traders and labor boys (also known as KYMsâ€™) all busy trying to eek out a living from their day-to-day activities. This was the destination of our beauty queens. In place of their prized stilettos, they wore knee high gumboots because they treaded in mud like an off road wheeler. They had to cover their well-manicured nails with rubber gloves because they had to stick their hands in murky trash. And their powdered noses were embraced with a gas mask because needless to say, murky trash produces a murky stench. Stinging stench I must stress. Quite literally, the beauty queens were brought down to earth as they spent a whole day engaged in a clean up day that was quite epic. So his is how it all began. 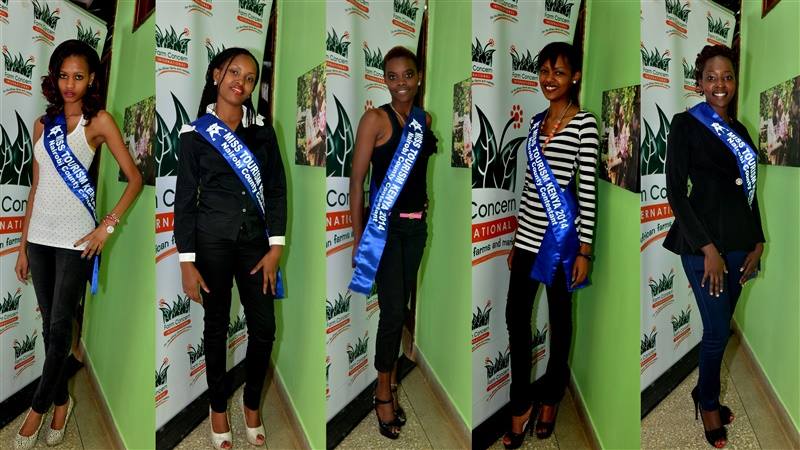 Miss Tourism Kenya is a national, regional and international youth competition geared towards promoting the six pillars that greatly contribute in building the economy of our nation through tourism. All 47 counties produce a county representative each to compete for the main title of Miss Tourism Kenya. So for our story, we will specifically highlight Nairobi County where our five clean up girls are competing. So Miss Tourism Nairobi was launched on 8th August 2014 at Ole-Sereni Lodge along Mombasa road. The target group was females aged between 21 to 28 years of age. I will spare you the details of the audition process and tedious girl selections, but at this level of the competition, there are a total of 17 girls each representing the 17 wards of Nairobi. The 17 contestants were divided into four groups of four girls, with one group having an extra girl. The groups were sent to different companies for one-day internships. All this was facilitated by African Urban Entertainment, the official franchise company for Miss Tourism Kenya 2014. And one of the organizations African Urban Identified to host the girls was Farm Concern International (FCI). So I had the good fortune of being invited by FCI to be part of the one day internship with the five beautiful contestants. I got there to find the girls all dressed up and looking fabulous! There was a beam of sunlight on their faces and I could tell they were ready to face off the task ahead of them. The girls were hosted at the organizationâ€™s office and briefed on what FCI does. Iâ€™ll not spare you the details this time and I will get to the hard facts of what this noble organization is doing. 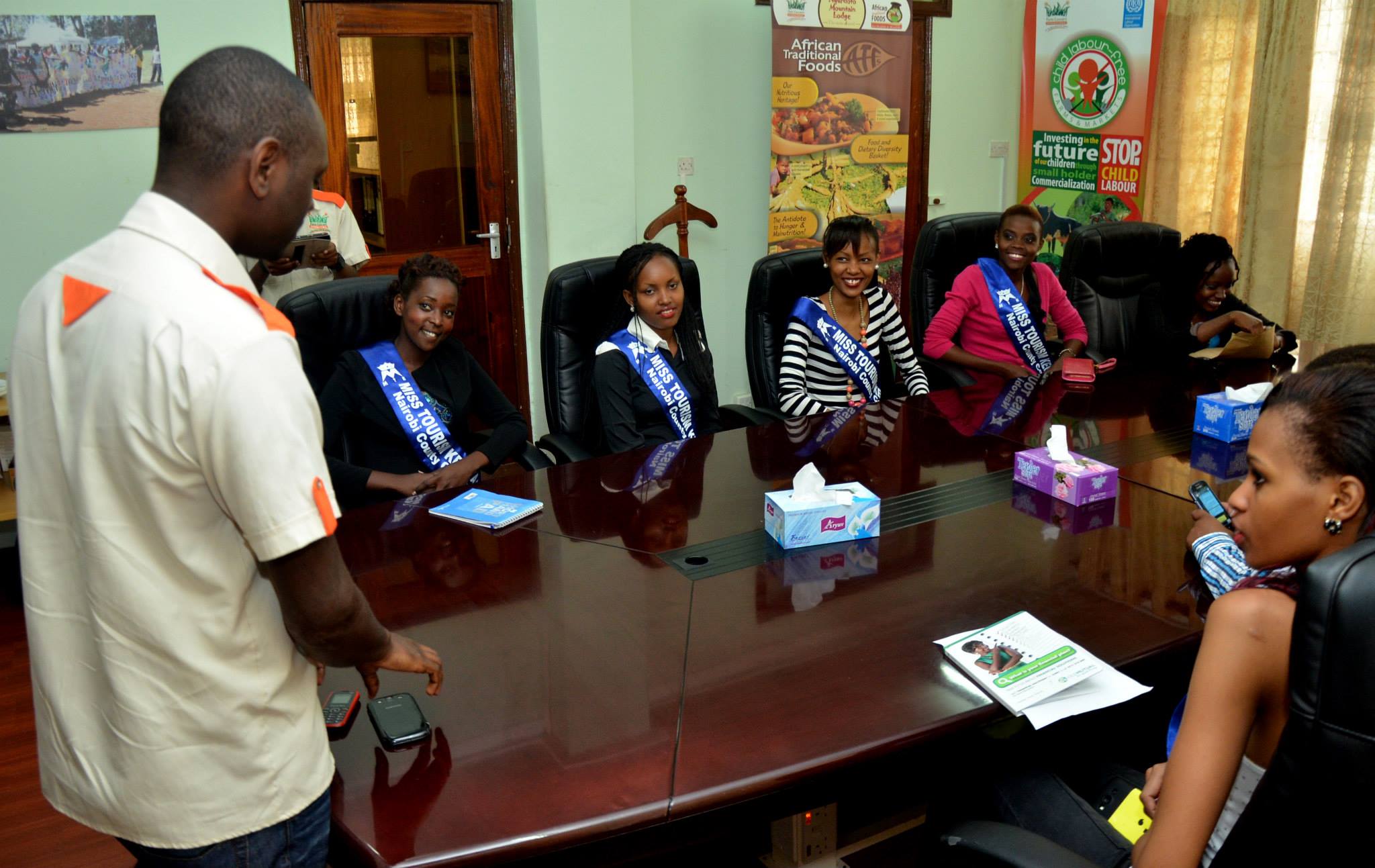 FCI is an Africa wide market development agency whose work is focused on commercialization of smallholder farmers and agro-pastoral communities. Smallholder farmers are small-scale farmers, pastoralists, forest keepers, fishers who manage areas varying from less than one hectare to ten hectares of land. Small holders are characterized by family focused motives such as favoring the stability of the farm household system, using mainly family labor for production and using part of the produce for family consumption. So Farm Concern Internationalâ€™s main objective is to transform these smallholders into businessmen who can make a living out their farming, which is largely subsistent. It basically sells to these farmers the concept of commercialization. Once the farmers begin to adopt new ways of commercialized farming, FCI also develops modern marketing concepts and helps these same farmers access markets, eliminating the otherwise crafty middle man who takes advantage of the smallholders. Considering the fact that no markets are designed for smallholder farmers, FCI ensures that the smallholders are on a consistent graduation pathway to markets. FCI just celebrated 10 years of hard work across 12 countries in sub Saharan Africa and enjoys development partnerships with agencies like Bill and Melinda Gates foundation, AGRA, USAID, The Rockefeller foundation, just to name a few. Needless to say, FCI is doing its part not only in tackling the food insecurity problem dogging the African continent, but also improving the livelihood of Africaâ€™s engine in agriculture which is the smallholder farmer. Quite noble work, ha? (Insert standing ovation here) Below is a short clip on FCIâ€™s annual report for 2013, highlighting key milestones achieved within the last ten years.

After our five contestants absorbed this critical information, they had a photo shoot session at the offices and later on had to fill their tummies with breakfast fit for Kings. Or is it queens? And they unashamedly ate without much thought of extra calories adding to their waistlines. If anything, the work ahead of them would be the perfect work out to burn any extra fat. Bearing in mind that FCI works with traders at Korogocho market, the clean up day was meant to conserve the environment and make it easier for traders to do their daily business in the comfort of clean surroundings. So armed with gumboots, rubber gloves and brooms, we set off for Korogocho market from FCIâ€™s main office in Westlands, with the girls engaged in a hearty conversation, each of them giving predictions of how their day will look like. Stop by for Part two and I will let you know how it all went down.