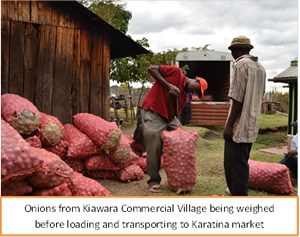 Conversely, FCI under the DoHoMa intervention, a programme supported by the Bill and Melinda Gates Foundation, has proven that when farmers are able to meet the bulk demanded, they too can effectively participate in trade as key players. FCI assesses every opportunity that is viable for smallholder farmers and designs and develops business models that allow the participation and competitiveness of smallholder farmers in markets.

FCI’s Commercial Village Model (CVM) brings smallholder producers together for collective action so that the small volumes produced are marketed collectively through the Commercial Village. Farmers produce in various farmland units and market in large volumes in order to meet market requirements.

Mercy Nyambura has been in the onion business for over eight years operating from Karatina, East Africa’s largest open air market. She initially began from as low as 100kg volumes but now she sells about ten tonnes of onions per month.

Mercy testifies that farmers in Kieni are meeting Karatina market’s demands, attracting traders and sustaining business. This is evidenced by the fact that four years ago, before the inception of the DoHoMa project, Mercy and her fellow traders would mainly source their onions from Tanzania; Tanzania had the best quality of onions as the market demanded.

“Although Kieni is closer to Karatina, farmers would grow the open pollinated varieties which are very low quality and do not sell in this market. So traders would not source from them. However, right now, I can verify that Kieni has the best quality of onions. FCI has trained farmers on how to grow hybrid onions which are being demanded by this market, and so we no longer need to travel to Tanzania to source for the onions, except during some months” she says. 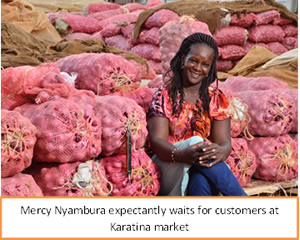 Through direct linkages between traders and buyers, middlemen who often exploited both the farmer and the trader have been eliminated, enabling both parties to negotiate for prices directly.

Mercy collaborates with her fellow traders. For example, if she is not able to buy the entire amount bulked by the farmers, she passes this information to other traders. When she does not have money to pay the farmers, then she borrows from her fellow traders and refunds after selling. This networking has ensured that farmers have ready market for their onions.

The vibrant onion business in the area has also created employment for the youth. The youth are involved in sorting and grading the onions when they arrive at Karatina market. They also load up the lorries.

Mercy says the biggest challenge for the traders is the poor road network.

“We hope the roads can be repaired because this will also enable us to buy at better prices from the farmers. Because of the poor roads, the drivers charge a risk allowance, and this cost is transferred to the farmers,” she says.

“As a trader, I am assured of thriving business because I am able to meet my customers’ need from the regular supply. From the onion business, I have been able to educate my children. I am able to send my children to the best schools in Kieni. I am planning to buy a car in the next four months, and in the next five years, a plot,” she says.