Yasinta, a small holder farmer from Moshi in Tanzania has flourished as a result of the Domestic Markets Regional Programme funded by Bill and Melinda Gates and implemented by Farm Concern International. She was struggling to earn income from farming maize, beans, coffee, bananas, sweet potatoes and green vegetables because of low production that can be attributed to use of uncertified seeds and lack of knowledge on Good Agronomic Practices. Yasinta and her husband faced a lot of challenges raising their children as they both had low incomes that could hardly cater for their needs. 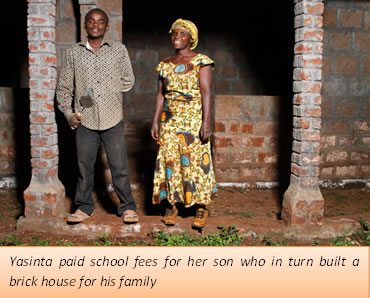 In 2013, she linked up with FCI and got trained on the benefits of consuming Traditional African Vegetables (TAVs), ways of setting up kitchen gardens and growing vegetables for family consumption and business. Joining the Agape Commercial Producer Group (CPG) aided her in learning better agronomic practices such as inter-cropping and how to make composite manure from kitchen waste.Â

In February 2014, her Commercial Village got linked to Suba Agro, a company that sold quality maize seeds and fertilizers and trained them on how to use the inputs. She purchased Di-Ammonium Phosphate (DAP) fertilizer and 20kgs of maize seed which she planted on her two acres and applied the agronomic practices learnt from FCI during commercialization campaigns. Yasinta welcomed the month of September all smiles for the assurance that her yields would double; her yields increased from 800kgs (0.8 tonnes) to two tonnes. She was able to make TZS 1,200,000 (USD 705.48) from the sale of maize and TZS 1,000,000 (USD 587.90) from the sale of beans.Â

Yasinta set up a kitchen garden in December 2014 where she planted Amaranth and African night shade. This was easy and convenient for her as it took up little space and required little water. Additionally, it saved her money because she used the vegetables for home consumption and also made income from its sale. After three months, she harvested five 50-kg bags per week which she sold for TZS 10,000 per bag and made TZS 50,000 (USD 32.12) per week. She had made a total of TZS 200,000 (USD 136.83) from sale of the Traditional African Vegetables.

The profits enabled her to pay school fees for her son to study masonry. The son was able to earn income using his masonry skills and purchased building materials which he used to build a brick house for his family. She is using the remaining profits to pay school fees for her other children. Her children now perform better because they are no longer sent back home for lack of fees.Â Yasinta is very happy that she gets to handle millions and her familyâ€™s living standards have improved.Â