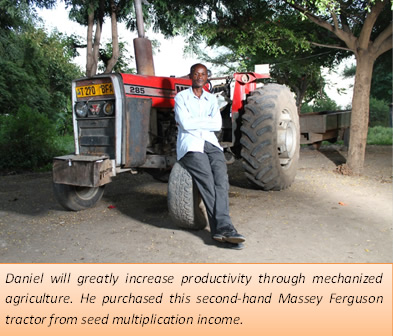 In three years working with Farm Concern International (FCI) under the Domestic Markets Regional Programme supported by Bill and Melinda Gates Foundation, Daniel Lekwana has purchased a second-hand Massey Ferguson tractor worth TZS 13 Million (USD 6,270.26) and paid over TZS 3 million (USD 1,446.98) in school fees for his children! Daniel Lekwama is a smallholder farmer from Arusha, Tanzania. Before he met FCI, he could not sufficiently cater for his family. His narrative changed in July 2012 when he attended a nutritional training forum conducted by FCI on cultivation of Traditional African Vegetables (TAVs) at Majimoto Commercial Village.Â

It is after this training that twenty farmers came together to form Kitumo Sonte Commercial Producer Group (CPG) in order to leverage on collective action. FCI enabled their capacity by facilitating their access to high quality seeds and planting materials which led to improved crop quality and production.