From Firewood to Biogas

Witness Kileo is a wife and a mother of five children living in Kashashi village, 51Â kilometres fromÂ Moshi town,Â Tanzania. Her family owns eight acres of land; five of the acres are dedicated to agriculture. For over 20 years, Kileo grew maize, beans and coffee. She however faced numerous challenges like low yields as a result of poor agronomic practices. 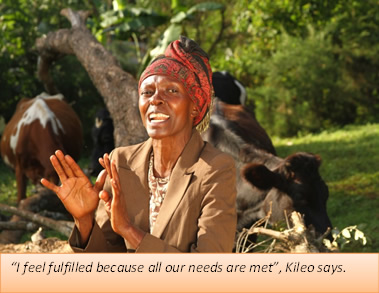 When FCI held a trade fair in her village in 2013, she learnt from one of the exhibitors, Centre for Agricultural Mechanization and Rural Technology (CAMARTEC), who install biogas, about the benefits of biogas. She learnt that biogas converts organic household waste into gas for cooking and lighting and that it is faster and easier to use as opposed to charcoal or firewood. She decided to have it installed at her home even though she could not afford it at the time.Â

In the same year, FCI introduced the Domestic Horticultural Markets (DoHoMa) programme in the area. The programme was aimed at training farmers on good agricultural practices such as spacing, application of agro chemicals and fertilizers. FCI required that the farmers organize themselves in groups. As a result, three Commercial Producer Groups (CPGs) were formed and Kileo joined the Shalom CPG. She got elected as the Commercial Village Facilitator (CVF). Part of her job was to mobilize farmers to join the group which she dutifully did. From this initiative, Seven Commercial Producer Groups have been registered to date.Â

After training sessions carried out by FCI, Kileo and her husband started engaging in tomato production on two acres of land. In 2013, they only managed to sell 40 crates at TZS 17,500 (USD 11.24) per crate, making a total of TZS 700,000 (USD 449.67). This low yields were attributed to use of inappropriate fertilizers and chemicals and use of traditional seed bought from other farmers.

From the profits made, Kileo and her husband have managed to have a semi-modern toilet built, installed solar power, bought larger beds for their children, bought a television and now have plans to buy a DVD player that the children will use to watch educational videos. They are in the process of clearing some land to construct a new house using the revenues acquired from tomato production and are planning to take their daughter to college.

Witness is very happy that she has handled millions of money and feels fulfilled that all her family needs are being met.