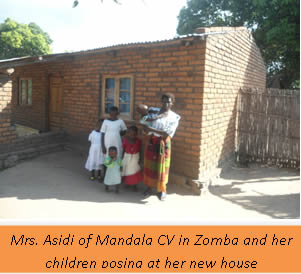 DoHoMaÂ is covering two districts in the Southern Region of Malawi: Zomba and Thyolo. One of the objectives of the program is to increase competitiveness through a value chain-wide capacity building for smallholders in order to achieve commercialization. Mrs. Asidi of Thokozani CPG in Mandala Commercial Village in Zomba has widely benefited from adopting the agricultural practices promoted in the program.

Mrs. Asidi joined the CPG in 2011 and has been one of the exemplary members of Thokozani CPG. Over the period she has been in the program, she increased her land acreage and from the maize, pigeon peas, cassava, rice, onion and vegetables sales, she was able to buy to build a house in 2013.

Mrs. Asidi is also a member of Thokozani CPG savings and internal lending scheme. In May, she realized K 60,000 (USD 150) and used part of the money to buy a pig expanding her enterprise. From adopting Good Agricultural Practices such as growing in volumes and planting quality clean seed, she has also been able to attract buyers. FCI linked her to Matia and Jali markets where she sells her produce.