After spending time with Joseph, a resident of Nchooro Village in Tigania, you realise his passion for what he does. He seamlessly explains the various topics involved in training other farmers. He perfectly fits his role as a Village Knowledge Worker (VKW), and is full of appreciation for the E-warehouse programme 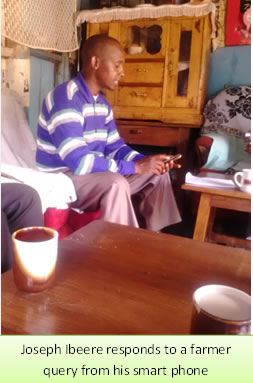 “Before Farm Concern International, we were working with other farmers in a self help group. We would often invite the Ministry of Agriculture to teach us. One time, the Ministry told us they had visitors from FCI. The FCI team asked us for someone who can speak English and Swahili so that he could teach the rest. I was one of the two people selected but the group elected me.

“After that, they started training us on using technology. We formed our Commercial Villages which are made up of Commercial Producer Groups. Since then, things changed for the better,” Joseph said.

As the VKW, Joseph was given a smart phone where he registered all the farmers in the Commercial Village. Each farmer has a unique ID.

“This is the same number we use to track the farmers bags of grains. When the farmers bring the bags to the store, we write it down and attach it to the bag. This makes it easier to track what farmer has worked with."

The smart phone comes with a CKW search application, developed by the Grameen Foundation, the implementing partner in E-Warehouse. From a simple click, Joseph is able to access information on different topics such as preparation, planning, and harvesting of grains. From this knowledge, he is able to prepare a topic and train the rest of the CV members.

“Every week, I prepare lessons on different topics and train about three CPGs,” he says.

Joseph says they have experienced the impact of information from the E-warehouse program. It also saves them time, because the information is available on the phone.

Joseph would waste a lot of seeds because he did not know the proper way to plant and space. However, he was able to access information on the proper spacing for maize.

After adopting the proper farming techniques, Joseph harvested 18 bags from his three acre farm, an increase from the 12 bags in the previous season. “We also used to sell 1kg of maize at Kshs 12. After FCI, we now sell at Kshs 25. In fact, right now we are selling at Kshs 37,” he adds.

From the increased sales, Joseph was able to expand their house by one more room.

“I am very thankful for Farm Concern,” he concludes.