Unearthed Business Opportunities in Cassava for Industrial Use (Animal Feeds, Human Foods, Starch and Ethanol) In Kenya and Tanzania

The Expanded Cassava Village Processing Project (ECVPP) implemented in Kenya and Tanzania targets to increase smallholder farmersâ€™ productivity and market access to cassava and sweet potato. Statistics are revealing that there are untapped cassava business opportunities both in Kenya and Tanzania. According to FAO, in Tanzania, annual cassava production is estimated at 5,270,270MT against the annual demand for cassava by industrial consumers that is expected to reach 600,000 MT dry cassava (2,400,000MT fresh roots) following the Presidential Cassava Initiative that is promoting the use of cassava as an ingredient in bread and biscuits. In Kenya, annual cassava production is estimated at 662,405 MT fresh roots against an estimated annual demand of 301,200MT dry cassava (1,204,800MT fresh roots)Â 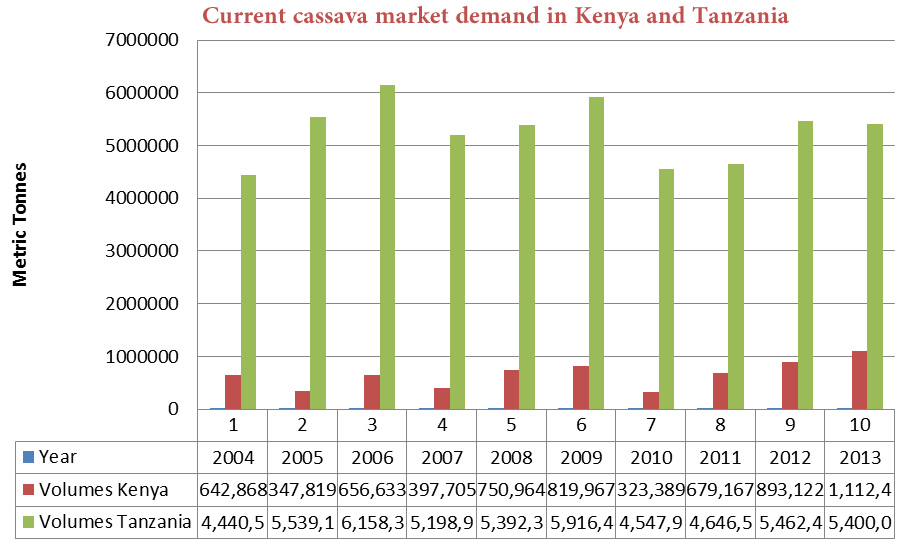 Cassava can be used in feed formulation in both dairy and poultry. In the case of dairy feed, cassava could be replaced to about 38-45% i.e. about 380kg in 1 tonne of animal feed. The percentage could go as high as 50% when making animal concentrates. For poultry, the percentage could go as high as 50% where maize is replaced by cassava subject to the extent of other materials e.g. glycocides. However, such a high percentage of cassava may result in slow growth for the broilers at about 20-30%. For the layers, cassava can replace maize up to about 60%, though the eggs are likely to be whitish in color as far as the York is concerned. The safe limit is about 30% replacement of maize with cassava.

Studies done in 2007 indicate that 800,000 tonnes of animal feed was produced annually. The figure currently is higher, considering the growth of the animal feed sector and the informal segment hence it could be estimated to be about 1M tones annually. Of this quantity, 60% goes to poultry, with further 70% being broilers and 30% being layers.

Thirty percent of cassava can be included in 1M tonne of animal feed, hence 300,000 tonnes of cassava would be required. Companies in Kenya are reluctant to use cassava for feed manufacturing because of the low quantities available in the market at a slightly higher price compared to other ingredients. This provides an excellent opportunity for cassava commercialization due to the great potential for inclusion in animal feed annually.

In the formulation of feeds, the processors consider the least cost combination of materials (LCC). Therefore, cassava would replace maize if itâ€™s sold at Ksh.12 per kilo, with 67 kilos being required for 1 tonne. Thus the farmer needs to cut down the cost of production per acre, such that it would be profitable to sell at a price that would be attractive to the processors and yet still make a profit margin from the business.

FCI will continue to promote collective marketing through the Commercial villages in order to drive the volumes demanded by the market and the private sector.Â