Farmers have often been frustrated by post-harvest losses they encounter due to poor post-harvest handling processes, especially storage. But following the E-warehouse programme intervention in Meru County, Martha Gatura is no longer worried about the vermin that often attacked her grains. 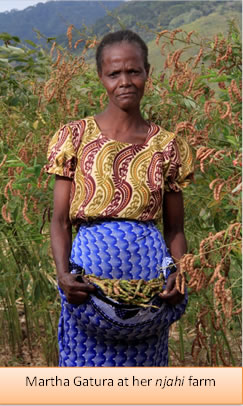 Martha walks around her Dolichos beans (Njahi) farm, carefully picking them and putting them in the shawl wrapped around her waist. She is going to prepare lunch from these beans. From her one and a half acre njahi farm, she has enough for food and for sale. At the right time, she will harvest the remainder of the beans, and store them in their commercial village warehouse waiting to sell at a later date.

“I used to store my grains at home, and rats would often eat them, leading to a loss,” she says. “It is now different and better since I can store them at the store and reduce the losses,” she says.

Due to post-harvest challenges among the farmers, E-warehouse programme was started to increase the value of the farmers produce after they store and sell when prices go up. Farmers Concern International started the programme to help farmers store their produce and when product appreciates, FCI links them with markets. FCI also keeps a portfolio of traders as well as institutional buyers to link them with farmers.

Under the programme, farmers also have access to proper agronomic practices. Martha benefited from this information.

“I used to put fertilizer after nine days, which would be too late because the crops would have been attacked by pests and diseases. Now I know you put after seven days which is what I did,” she says.

When she adopted programme, she harvested eight bags, double from the four bags she used to harvest. Martha has also benefited from table banking, also introduced under the E-warehouse program.

Marega CV practices table-banking, a group funding strategy where members of a particular group meet once every month, place their savings, loan repayments and other contributions on the table then borrow immediately either as long term or short term loans. They use the money borrowed as capital for their projects.

Martha borrowed some money from the account to buy inputs for her farm. “I used to plant without inputs because sometimes, I didn’t have the money to buy. Now I am able to access money whenever I need it,” she says.