Thirty two percent of Kenya’s population consists of youth aged 25-54 but most of them are unemployed. Those from rural areas often flock to towns such as Nairobi City to look for casual jobs. Due to job scarcity some join crime. However, youths in Kieni County are prospering through farming, under the Domestic Markets Regional Programme implemented by Farm Concern International with support from Bill and Melinda Gates Foundation. 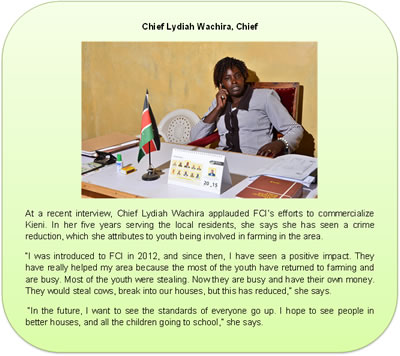 At a recent interview, Chief Lydiah Wachira applauded FCI’s efforts to commercialize onion farming in Kieni. In her five years serving the local residents, she says she has seen crime reduction, which she attributes to youth being involved in farming in the area.

“I was introduced to FCI in 2012 and I have seen a positive impact. They have really helped my area because most of the youth have returned to farming and are busy. Most of the youth were stealing but now have their own money. They would steal cows, break into houses, but this has reduced,” she says. “In the future, I want to see the standards of living improve. I hope to see people in better houses, and all the children going to school,” says Chief Lydiah.

One such young man is Paul Gichohi from Embaringo Commercial Village in Central Kenya. At 25 years, he has set an example for his fellow youth by engaging in onion farming. He started farming under the Programme in 2011 by planting onions on a quarter acre piece of land that he hired. He sold the onions for Kshs 80,000.

Paul proudly talks about his mentor, Daniel Gakuo. “I had heard about Daniel Gakuo, so our CV chairman invited him to train us with the rest of the youth in our youth group. He shared with us how he left employment to go into farming. He is my role model because he showed me that I don’t have to be employed and he taught us how to farm without investing a lot of money. He also encouraged us to believe in ourselves,” Paul says.

Earlier in the day, Paul had gone for one of the training sessions that Mr. Gakuo offers. “Today, I learned that the rosabella hybrid seed is doing well, and I intend to plant it next season,” he avers.

Paul says he has been able to buy half an acre piece of land and build his own house and he is also supporting his siblings in education, lightening the burden on his parents.